Egypt is one of the great early civilizations of the world. Owing to its arid climate and the use of stone to build its  massive burial pyramids, monumental statues, obelisks and temples it is also the best preserved of the early bronze age cultures in terms of its remaining buildings. At the time of Christ and the start of the Roman Empire some of these edifices were already 2000 years old and served as tourist attractions for the classical world.

Although we know much of Egyptian funeral, religious and monumental structures, little remains of the ancient cities and villages where people actually lived. Take for example the great city of Memphis south of Cairo.  A complex of Old Kingdom pyramids and funeral temples lies today on the dry desert ridge just above the former site of Memphis. Almost nothing remains of the urban center itself. The reasons for the loss of the mundane urban and village structures lies partly in the use of adobe brick, the flooding and shifting of the Nile and the habit of cities to build new structures on the rubble of older ones – often using the old stone for new structures. The life of the common person disappears with time. 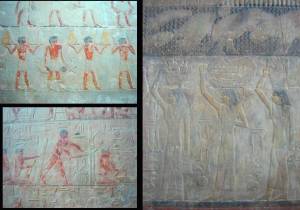 Occasionally we can catch glimpses of the ancient commoner’s Egypt through archaeology. Tomb paintings from Saqqara south of Cairo show day-to-day life in the Old Kingdom – some 4000 years ago. Men work in the field and at other tasks, women carry produce on their heads, scribes record transactions. Hundreds of figures provide a snapshot into the ancient past and lives of the common person
In the western desert the remains of an ancient alabaster mine contains piles of broken pottery and stone tools – while rough stone outlines show the former location of closely spaced tiny structures that workers probably lived in while mining in the hot inhospitable locations. A far cry from the temples and luxurious boats of the Pharaoh plying the Nile to the east.
However, one does not have to travel to the remote desert to find vestiges of an ancient Egyptian existence You can still see sun-baked adobe blocks used in building small homes and other farm buildings along the Nile, the Nile Delta and Fayum. Life in rural Egypt today is in some ways a curious mixture of the modern and ancient. Cell phones mix with waterbuffalo, people carry produce on their heads down shady farm lanes while a short distance away modern cruise ships transport tourists up and down the Nile. Honey is gathered on Delta farms from adobe bee hives and then poured on flatbread that has been hand-shaped and then cooked in gas grills. Although Egypt is rapidly urbanizing a large part of the population still works the land. However, despite the almost unbelievable fertility of these bottom lands, not enough is produced to fully support Egypt’s growing numbers. 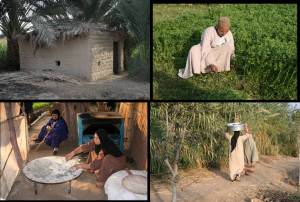