Surprisingly, agriculture came late to Egypt compared to Syria and Iraq which lay to the east. By 10,600 to 10,000 years ago (8600 to 8000 BC) agriculture had taken firm root in ancient Mesopotamia and adjacent regions in Near and Middle East. According to archaeologists from UCLA and the University of Groningen in the Netherlands agriculture did not arrive in Egypt until about 7200 years ago (5200 BC).

The evidence for the earliest agriculture in Egypt comes from just west of Fayum Oasis. This massive agricultural region south of Cairo remains an important source of food for modern Egypt. On in the desert sands just west of current cultivated areas Dr. Willeke Wendrich from UCLA (a Co-leader of the project) and her colleagues have found evidence of grain cultivation and processing and domesticated animal use by Neolithic peoples. Today the stone implements and pottery of these peoples, their refuse piles of shell or bone and other traces are found on the surface and just under the sands of the desert.

Why did agriculture came so late to Egypt? What caused people to transition from hunting and gathering to agriculture?  Why are these early traces of agriculture found out in the desert west of Fayum, where massive irrigation would be required to grow crops today? Archaeologists continue to search for definitive answers to these questions, but some insights are available. Perhaps early agriculture was also practiced in the Nile Valley and Delta, but the flooding of the Nile and shifts in river channels may have erased most traces.  The answer to how Neolithic people were able to practice agriculture west of Fayum, in what is arid desert today, lies just belo 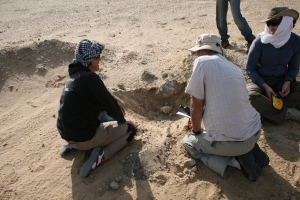 w the surface of the sand. In many areas one can find geologic deposits of lake sediment and marsh sediments that show us a much moister environment existed in the past. Indeed, at about 11,000 years ago this area of Egypt and the Sahara desert in general was much moister than today. Over time the climate became more arid, the wetlands and savanna vegetation disappeared, the sands became dry and mobile and the modern Sahara developed. The remains of the Neolithic agriculturalists and the lake and wetland deposits date back to this moister time. The ancient farmers lived along the lake shores and near wetlands and used those resources. Then natural climate change and increasing drought became too much and the people were forced to leave as the wetlands disappeared and the sands advanced.