One of the most beautiful places in all northern Syria is the Afrin River Valley with its green and well watered farmland, pastures and orchards. When descending into the Afrin Valley from the high barren mountains to the south it is easy to imagine this as the model for biblical Eden. Situated high on an isolated tell in the valley is the Neo-Hittite temple at Ain Dara. The excavated temple is constructed of dark rock deeply worked with ceremonial carvings and provides commanding views of the fertile plains around it. It is easy to see its role as the center of spiritual activities for the local population 3000 years ago when it was in use – perhaps to worship the goddess Ishtar.

Aside from its quiet contemplative beauty as an ancient place of worship, the temple at Ain Dara represents something else. It and the Neo-Hittite culture that is symbolizes come from a time of recovery and innovation following widespread societal collapse.

During the 12th century BC the western Middle East, from Egypt to the Levant and the Hittite Empire of northern Syria and Anatolia was wracked by violence and societal breakdown. One widely reported cause of this dissolution of the old empires, cities and socio-economic structures was the warlike activities of a mysterious ‘Sea People’. Cuneiform tablets and Egyptian hieroglyphics record their attacks, and the fear and menace felt by the Middle Eastern civilizations. There followed a Dark Age for which written accounts are sparse and from which some cities never recovered.

The temple at Ain Dara represents the work of one of groups who survived and arose again from the Dark Ages of the 12th century BC – the so called Neo-Hittites. They maintained some of the traditions and ways of the older Hittite Empire, but in much smaller city states. However, the collapse and recovery of the 12th century Dark Ages may be more than a story of survival. It may have prompted one of the most important technological innovations of all time. Prior to the 12th century collapse the dominant metal for tools and weapons was bronze – made from a mixture of copper and tin. Hence the term Bronze Age for the period between approximately 3300 and 1100 BC in the Middle East. These metals typically do not occur together in the region and the manufacture of bronze required organized trade networks. These networks were widely disrupted during the 12th century. It has been suggested that due to the scarcity of the ingredients required to make bronze people turned to a more abundant metal and refined its processing to produce an even superior material for tools and weapons – iron. Thus, it seems that from the disorder and collapse of the Bronze Age arose not only a recovery, but innovation and the birth of the Iron Age. 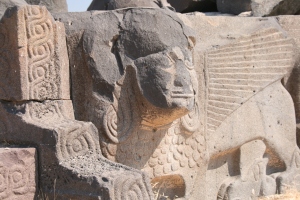 One thought on “The Temple at Ain Dara – Collapse, Recovery and Innovation”